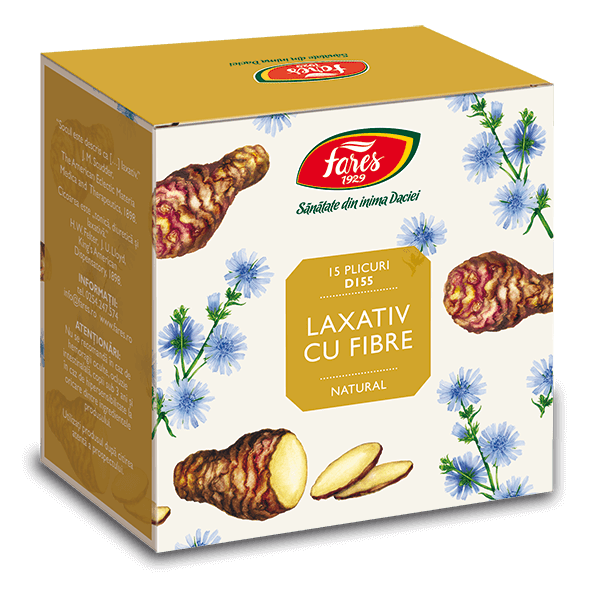 This product is now cheaper because it belongs to the category of products that benefit from a VAT of 9%.

Eliminates constipation, cramps and reduces flatulence due to Psyllium fibers.

Normalizes intestinal transit naturally and effectively without irritating the mucosa of the digestive system.

The product is addressed to people with:

o             irritable bowel syndrome with the predominance of constipation

The product’s action is provided by the balanced synergy between the laxative effect and the symbiotic one (prebiotic and probiotic):

– The probiotic action consists in restoring the intestinal flora. The effect is due to the yeast species called Saccharomyces boulardii

– The prebiotic effect supports the growth and activity of saprophytic, “friendly” intestinal bacteria and is provided by the inulin from chicory root and Jerusalem artichoke tubers

Fiber laxative is effective as the only treatment in irritable bowel syndrome with the predominance of constipation as well as chronic constipation.

Easy dosage: one sachet for one use

A sachet per day, preferably in the evening. Administered with yogurt or 200 ml water, before a meal.
The product is administered daily until intestinal transit is regulated.

WARNINGS:
Not recommended in case of occult bleeding, intestinal occlusion, for children under 3 years old and in case of hypersensitivity to any of the product’s ingredients.
PREGNANCY AND BREASTFEEDING:
Not recommended for pregnant women due to possible effects of stimulating uterine contractions. Not recommended for breastfeeding mothers due to the fact that the active substances pass into breast milk and may change its taste.
SIDE EFFECTS AND INTERACTIONS:
No side effects were reported at the recommended doses.
Take the product at a minimum 2 hours before administration of drugs, as it may reduce their intestinal absorption.
The product can be associated with Laxativ-D50/D76 tea or Tranzit rapid-D152 tea.